An unusually warm, yet windy October day, with many things on our to-do list in the Boystown neighborhood, gave us the opportunity to try a new spot for us – Drew’s on Halsted. After rejuvenating visit to the chiropractor, we arrived around 11:30am.

Upon entry into Drew’s, we were immediately greeted by a friendly host, who took us to our preferred location, the bar. The windows were open, and a healthy breeze blew in a warm wind. There was one other person seated at the bar and a couple tables occupied in the restaurant, but it was relatively empty. The music provided for a chill vibe at an easy listening level, and the two TV’s at the bar were playing a movie on TBS that was eventually changed to college football per the request of another patron.

The restaurant picked up around 12:15pm, with several large parties in the restaurant and a few other people at the bar, which appeared to overwhelm the seemingly understaffed workers.

While there is a ramp from the sidewalk into the restaurant, the doorway is relatively narrow, which might prove difficult for some patrons. The restrooms are single occupancy and very spacious, as well as clean, which is generally expected, but always a bonus.

There is a cute enclosed patio in the back of the restaurant that does have a small step down from the interior, however we think that it may also be accessible from the side patio. Any reader input on that would be appreciated.

While there is not a bottomless mimosa deal at Drew’s, they do offer a couple specials in the drink arena. They serve $3 mimosas, with six juice options: pineapple, peach, pear, mango, guava nectar, and orange. They also have $7 house Bloody Mary’s and brunch fruit martinis, as well as a house red sangria for $6. The star of the show, however, is the Build your own Bloody Mary bar featuring 16oz. SVEDKA Vodka and all the fix-in’s for $10. 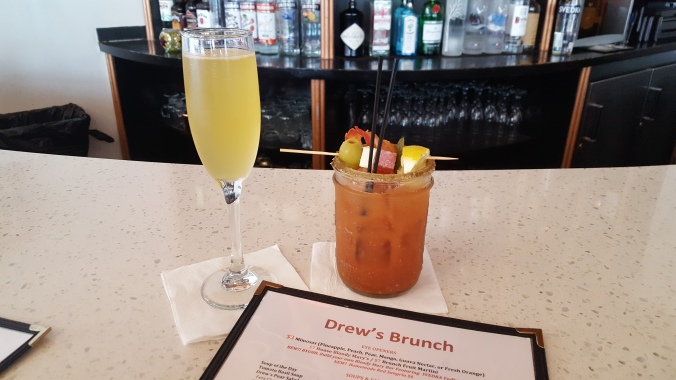 The food menu offers a variety of options, from classic breakfast fair to soups, salads, and sandwiches.

Becky decided to go for one of her favorite brunch items, a crab cake benedict. The menu description states that it included fresh lump crabmeat, hollandaise sauce, herb roasted potatoes, and fresh fruit. As always, she had the hollandaise on the side. Unfortunately this was a really disappointing dish. The fruit was anything but fresh, the potatoes were roasted within an inch of their lives, the English muffins were soggy, and the crab was barely there. On top of all of this, the crab cake was bitter, maybe from the inclusion of pepper in the cake or the asparagus that was surprisingly a part of the benedict. The only redeeming quality was that the egg was perfectly poached, but it wasn’t enough to make the dish enjoyable to eat. 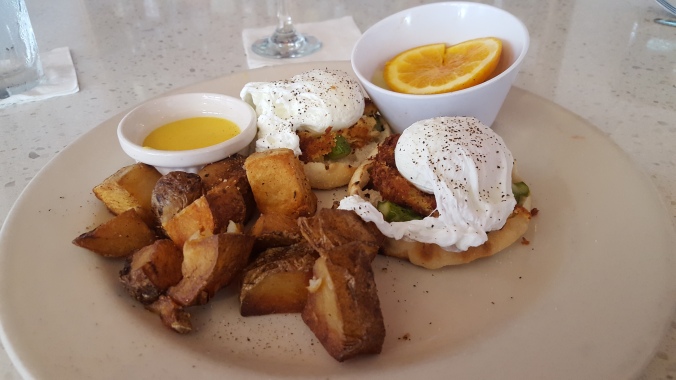 Jodie ordered a classic grilled steak melt, which featured caramelized onions, mushrooms, and melted mozzarella cheese on ciabatta bread, with a sweet and spicy mustard sauce on the side, and a choice of parmesan truffle or plain fries.

The meat was tender and cooked well, if not a bit on the chewy side. The caramelized onions added a touch of sweetness and paired well with the creamy melted cheese. The bread was light, crispy, and not too dense. It held up well to the rest of the ingredients. The fries were pungent with truffle essence, but not overwhelming. The mustard was a nice counterpoint to the earthy saltiness of the fries. They weren’t as crisp as Jodie usually likes them, however.

The friendly patrons at the bar and random conversations because of that. If that’s your thing.

The Bloody Mary bar. You could really make a meal out of the accouterments that come alongside the drink. They even have plates so that you don’t need to stuff your glass full of meat, cheese, and pickled things. Also, the pour of vodka is very healthy, so you get your money’s worth.

Once again, J Roget has clouded our brunch experience. And for three dollars a pour. Oof. The staff and clientele were a warm and friendly bunch, but the food was underwhelming. Maybe owing to the initial slowness of the brunch service, the kitchen hadn’t quite found their rhythm. And while the bloody mary bar was truly excellent, it can’t save Drew’s from a disappointing 6 out of 10.